A Global Perspective at Christmas

My brother, Evan has always been the global thinker in our family. He has his finger on the pulse of those less fortunate both in his neighborhood and abroad. He is a children's pastor who leads the kids under his influence to take action globally, especially in Uganda. Through a variety of activities, his children have become personally connected to the plight of the poor in Uganda. More than that, they are “learning to do good” while developing a global perspective. What a gift!

It was no surprise that Evan introduced the idea of “micro-financing to end poverty” to my brother Marc several months ago. I only have to hear “micro-” and my eyes begin to glaze over and by the time I hear “financing” I am totally checked out, but I will try to explain it in “Marsha-ese”. Micro-financing is LENDING funds to the rural poor in developing countries, usually in the form a small loans (smaller than banks are interested in loaning). This is often the only way they would be able to establish or maintain a business that has the ability to lift themselves out of poverty. Loans are repaid and can then be re-loaned to other individuals. The concept is quite amazing, and has real potential to put a major dent in extreme poverty.

Marc began to research this concept and came across an organization that actually connects people, through lending, for the sake of alleviating extreme poverty. Kiva is “the world's first person-to-person micro-lending website, empowering individuals to lend to unique entrepreneurs around the globe”. If you want more information check out the about page on Kiva's website (the video is great). About Kiva.

This Christmas, the Abla side of our family decided that we would take the amount of money normally spent on gifts for each other and instead invest at Kiva. So, last night all 12 of us, kids included, squeezed into our family room, sat around the Christmas tree began to invest in real people around the world.

Creating our family account was an ordeal in itself. What would we call our group? You can only imagine the suggestions with the names Cuttill Roat Abla Price (no, we did not select CRAP as our Kiva name, but you know it was discussed. Check us out anyway at Cuttill Roat Abla Price ). With the family photo snapped and uploaded, we only had one more step to complete our profile. We had to finish the statement, “I loan because...”. I don't think any of us had actually thought much about why, but our answer came when Evan recited Isaiah 1:17 “Learn to do good: Seek justice, rescue the oppressed, defend the orphan, plead for the widow.” This scripture became our hymn, as well as our Kiva group slogan. We invite all to join this group at Isaiah 1:17

Once our family account was initiated, we pressed the much anticipated “lend” button on the site. Waiting anxiously for the multitude of needy folks to pop up, we became instantly disappointed when we found NO loans were available to be funded! WHAT? We waited and waited—still—none. Then, all of a sudden, one profile came available. In unison we yelled at the computer operator “CHOSE THAT ONE! CHOSE THAT ONE!” and that's how Jhudy, a small grocery owner from Peru, became our first investment. As we read about Jhudy's life and circumstances, excitement began to grow in the room. Jhudy was a real person with a real desire to make her life better and overcome poverty through entrepreneurship.

We followed the same process to fund the next seven loans and each time the kids would read about these people and become a bit more engaged in the process of investing. Once all of our initial monies were spent, several more loans became available. It was at this point that my sister-in-law announced, “Hey, Marsha. Here is a widow with a daughter from Tajikistan who is seeking a loan to invest in seeds and mineral fertilizer to improve the quality of her produce.” Well, she had me at “widow” and Begidjon Khairova became the first loan we were able to choose ourselves and the final loan of the evening. Funny thing was, everyone still had their laptops or iPhones out researching other loans on the site. Zack had created a “group” on Facebook and everyone had created personal accounts on Kiva. 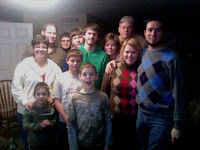 We were looking forward to debating on who to "invest" in - what type of investment, where, etc. We talked about investing in someone who was in the education arena (perfect for Marsha), health (fitting for me), manufacturing, etc.

However, with the low number of entrepreneurs available on the site last night, it became our "unwrapping!" As you said, we clicked quickly, invested even faster, THEN read about the person we had invested in. Although, that may not be what Kiva is all about... last night, it was what we needed as a family.

It was like having a present in front of you, not knowing what was inside, excited about opening it, and knowing that someones life was about to change.

If you haven't looked at Kiva, please take a few minutes. $25 can go a long way.

Amazing stuff! Good for you guys!