A colleague of mine introduced me to Project 365. At first I wasn’t interested at all because I am “scrapbook challenged”. I seriously—HATE to scrapbook, BUT I love to take pictures and love to write--thus appreciating the possibilities of such an exercise. I contacted my BFF’s daughter, who is an Internet mastermind and an amazing photographer, with this idea. Of course, she had an electronic answer to my dilemma within 24 hours (thanks Nicole). So begins my project—365 days of photos and musings. I am amateurish when it comes to structure, but I hope this will help me organize and creatively present the mundane and the occasional profundity that is my life. If you are interested here is the link: Marsha's Project 365. If you would like to join us--simply sign up and add me as your friend.
Posted by Marsha at 4:14 PM 7 comments

I don't know why it is that the Britain's Got Talent always has some surprising stars, but they do every year. Check this out: The embeded feature is disabled so you will have to click on the site: 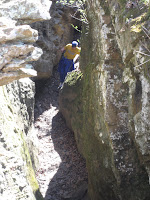 We have been in Arkansas this week on vacation. It has been a lovely week of rejuvenation and exploration. Yesterday, we visited Devil’s Den State Park for some hiking. We hiked up to a cave which I explored partially as the boys, much more adventurous than I, explored in detail. It was one of those “I could have never done this in my former life, but wish I could have” moments.

The hike was not easy. I am sure it wasn’t the most difficult either, but with three 13-year-old boys we had to explore every cavern, crevice and waterfall on and off the beaten path. At one point the only way to exit the crevasse was to climb a tree vine. My son said, “Mom you shouldn’t go that way, you won’t be able to get out. You’re not strong enough.” He didn’t realize “them's fightin’ words”. As if I were 13 years old myself, I considered his words a dare. Now, I HAD to not only attempt, but also succeed; not only make it up the crevasse, but also make it look effortless. Why, you say? Because, my tender pride had been called into question and because I wanted to prove to myself that I could do it. Waiving to my son from atop the chasm was one of the high points of my vacation.

He looked up with shock and asserted, “Mom, I never even thought you could do that 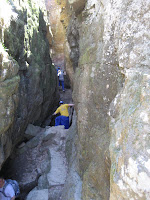 With a smile of total satisfaction, bravely concealing my labored breaths and sore knees I retorted, “Ah, it wasn’t that big of a deal,”

The more I thought about it, the more I realized just how big a deal this feat was for me to accomplish. Living most of my adult life overweight and sedentary, such a climb would have been impossible for me to achieve before. Not only that, I wouldn’t even have had the desire to attempt it. Thankful that I chose this second chance, I relish these small victories as a banner of the choices I have made.
Posted by Marsha at 9:48 AM 7 comments

I want to be here someday---