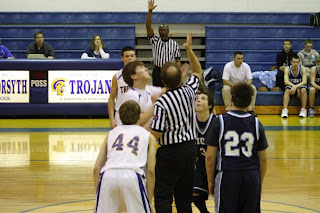 It is difficult to be in the stands during a game when the score is close. Nail biting begins, hearts begin to race, palms begin to sweat; sitting anxiously I await the outcome. It is even worse if one of my children happens to be on the team.

Chandler's middle school basketball team advanced to the regional finals this season. As the game went into its first overtime, I began biting my nails. When the second overtime clock began ticking; my heart began to race. But when the game went into triple overtime, I thought I was going to have to be removed by stretcher. At the end of the game we were left heartbroken; the boys lost by two points. Following the ceremonial, congratulatory team handshake the boys walked off the court, disappointed.
I wanted the basketball team to win that game, but not as much as Chandler. He could smell victory. It was right there for the taking, but in the last seconds it slipped away. For the first time, I saw 14 year old boys, who I had known since kindergarten, in tears. Loss is hard!
On the way out of the gymnasium, a grandfather of one of the players stopped me. He said, “I know sports is beneficial for these boys. They learn teamwork and perseverance, but most of all, sports teaches kids how to lose.”
I had never thought of sports in this light. As parents, we instinctively hope our children never have to deal with great disappointment, yet in our gut we know they must. It seems that children who are “rescued” from heartbreak and loss tend to “crash and burn” at the first sign of disappointment.
Imagining that the ride home with Chandler would be difficult, I began preparing my motherly pep talk which surely would change his disappointed affectation. I couldn't have been more mistaken. Instead, with head held high he jumped into the “mommy bus”, promptly announcing, “We have nothing to be ashamed of. We played a great game.”
I know that living through the small disappointments in life, gives way to developing the resilience needed to deal with huge ones. Strength and confidence comes not only from victories, but from knowing you can handle defeat. Perhaps true victory occurs when we experience loss and still are able to hold our head high and move on.
When Don died, my greatest fear was that my kids would be broken, but life had already taught them loss and disappointment. Though perhaps smaller in measure, the lessons were real nonetheless. When we are faced with adversity, heartbreak, disappointment or loss, victory is often found in the lessons learned.
Posted by Marsha at 9:41 PM 2 comments